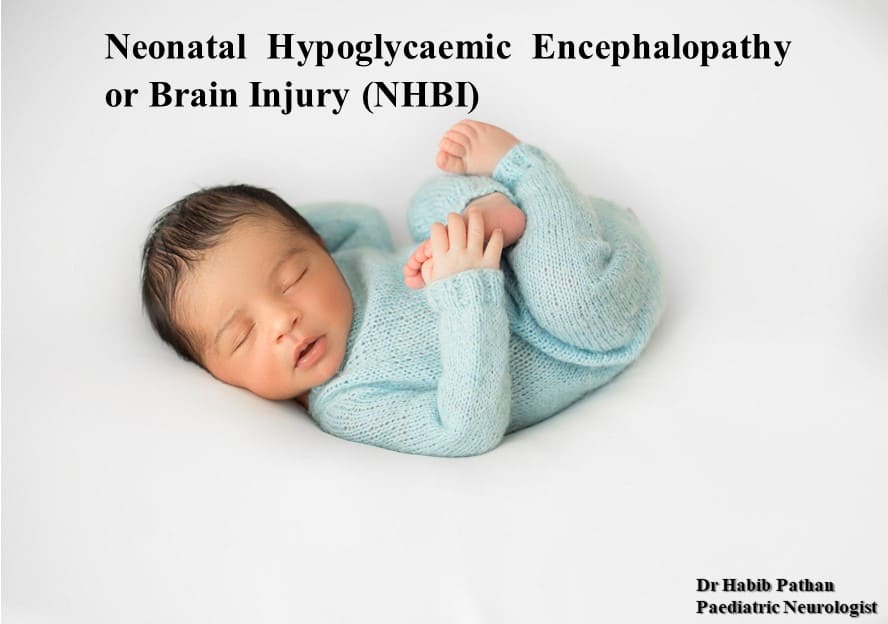 Hypoglycaemia is difficult to define in neonates but generally considered as serum blood glucose concentrations – less than 45 mg/dl. Neonatal hypoglycemia is a common complication among preterm infants, small-for-gestational-age infants, and infants of diabetic mothers.

Severe hypoglycaemia is a metabolic event that causes irreversibly altered levels of consciousness, cognitive abnormalities or decline and death. Recurrent or persistent hypoglycaemia can cause permanent brain injury which may lead to hearing impairment, visual disturbance, secondary epilepsy, tachycardia and other disorders of the central nervous system.

Neonatal hypoglycaemic encephalopathy or Neonatal Hypoglycaemic Brain Injury (NHBI) is either symptomatic or has non-specific symptoms. The symptoms associated with NHBI are non-specific and include the following:

The other pathological conditions may include severe infection or birth asphyxia.

A paediatric neurologist diagnoses hypoglycaemic encephalopathy by examining the infant, evaluating the risk factors, reviewing the symptoms, and checking the blood glucose levels. The doctor initially evaluates the infant to rule out other conditions such as sepsis, asphyxia or hypocalcaemia as the majority of the signs and symptoms are non-specific. Infants who are at increased risk and without the signs and symptoms require immediate blood glucose check. Abnormally low blood glucose levels confirm the diagnosis.

The most sensitive and specific screening method for diagnosing hypoglycaemic encephalopathy (Neonatal Hypoglycaemic brain injury) is MRI – which is far better than ultrasound and CT. This neuro-imaging test is useful for early diagnosis and follow-ups. It is also useful for demonstrating the extent of brain injury and predicting clinical outcome.

Hypoglycaemia is a medical emergency and therefore, if you notice any signs and symptoms of extremely low blood glucose levels in your infant, ask for medical help immediately – it could lead to life-threatening complications – convulsions, cognitive abnormalities, seizures and even death.

Are You Aware of Floppy Infant Syndrome (FIS)?

Floppy infant syndrome is also called as Hypotonia or Rag-doll syndrome. It…

Triggers for epilepsy seizures in children: Seizures mostly occur randomly without any…

Are Febrile Seizures Harmful to a Child?