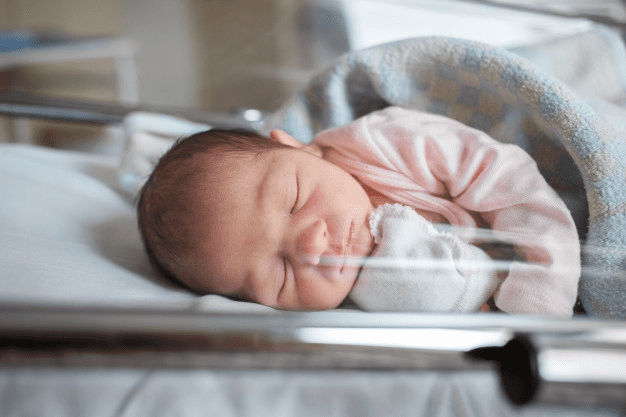 Hypoxic-ischemic encephalopathy (HIE) which is also known as Perinatal asphyxia is a condition that is associated with brain injury (acute or subacute) due to asphyxia (A condition in which insufficient or no oxygen and carbon dioxide are exchanged). HIE is characterized by laboratory and clinical evidences of brain injury.

The major causes of HIE are Reduced cerebral blood flow (CBF) and or systemic hypoxemia. Nearly about 23 to 24% of all neonatal deaths across the world are attributed to birth asphyxia.

Moderately severe hypoxic-ischemic encephalopathy: In this type of condition, the baby feels lethargic to a great extent with significant loss of muscle tone (hypotonia) with reduced deep tendon reflexes. Sucking ability and reflexes may be absent or sluggish and grasping ability significantly falls lower. Furthermore, babies may have periodic episodes of sleep apnea.

Babies experience seizures immediately after birth within the first 24 hours of life. There is a possibility of complete recovery within first one- or two-weeks following seizures – which is associated with promising long-term results.

Severe hypoxic-ischemic encephalopathy: Seizures may get delayed and when occur they seem to be resistant to the treatment modalities and medications. Whenever seizures manifest, they tend to be generalized with augmentation in episodes of seizures during the next one or two days after the onset.

Seizures episodes diminish with the progress of brain injury and the electroencephalogram shows suppressive pattern. This phase is associated with diminished wakefulness and increased cerebral edema. In addition, the following symptoms may be associated:

An initial phase of mild MIE is followed by sudden deteriorating health indicating brain cell damage and dysfunction, injury and cell death with an increased frequency and episodes of seizures.

The doctor performs a thorough physical examination and evaluates the infant for HIE. Paediatric neurologists perform retinal and ophthalmic examination during the clinical examination. In acute neurological injury cases, hypotonia, seizures and involvement of multiple organs is indicated including heart, liver, lungs, kidneys and stomach.

Hearing tests may also be recommended as deafness seems to be a common finding in infants with hypoxic-ischemic encephalopathy.

Following initial resuscitation and stabilization, treatment of HIE is largely supportive and should focus on the following